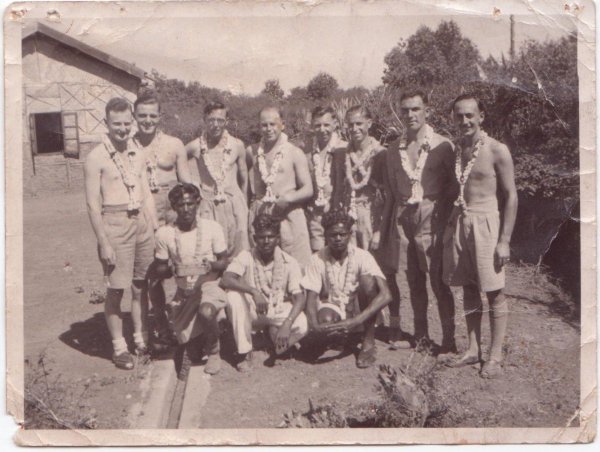 Two days after marking the 25th anniversary of Tiananmen Square, I am sat watching the BBC coverage of the 70th anniversary of the D Day landings from Arromanches, France. I am reminded of the struggle for freedom both events share. The message is clear, we must never take freedom for granted.

My paternal Grandad landed on D Day plus 1. He never spoke to me about it, not sure how much he told my Dad or my Aunty and I am inspired to ask them now so that Grandad’s history won’t be lost. He was a medic and he had the job of sorting out the living from the dead on the beach. After the war he went on to train as a psychiatric nurse and worked at a large institution in Yorkshire. There were many refugees there too and my Dad tells stories of mixing with them; one story is about being told off at school in a German lesson for speaking with an Austrian accent, not knowing that it was because an Austrian Jewish refugee lived and worked at the hospital and helped my Dad with his learning! What those men went though, we shall never know.

The only photo I have of him from the war is this one from when he was stationed in India. He is second on the left, standing. 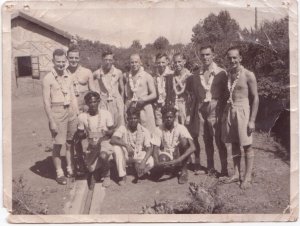 Random thoughts I have picked up from today’s coverage:

These service men didn’t opt to have a military career, they were called up and that’s what they had to do.

They rarely spoke about it when they came back, how much they must have still endured silently.

Many soldiers buried in Normandy following D Day were only aged 16-20, the average age of today’s 600+ survivors is 89.

The incredible civil engineering feat, the building of the Mulberry Harbour, that meant that the landings were supported and sustained.

The extraordinary personal stories that have been related today are so moving, one man saying he knew his role was that of cannon fodder and as he waded ashore, he waded through dead bodies just floating around him and then through more on the beach itself.

This photo represents the fallen bodies on one of the beaches. 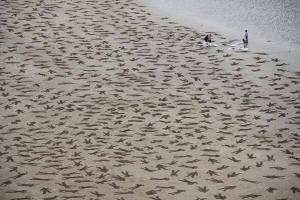 Today no-one glorified war or celebrated it, the day was about remembrance, reconciliation and reflection and passing that message on to the next generation.

The sense of reconciliation came across strongly in the formal speeches as well as in the personal interviews. Watching the German Prime Minister Angela Merkel take her place and be applauded by the crowd was moving, remembering that the fight for freedom was against Naziism not ordinary Germans who, as one person said today, fought for the same things we did, family and friends.

The sense that there are some occasions when present day issues must be put aside; watching Vladimir Putin was hard, but today he represented the millions of Russians who died in the war not his present politics and it is them we remember not him.

When I was born, it was 18 years since the end of the war in Europe. I was one of the lucky ones at school, I had both my Grandads alive (my maternal Grandad had fought in WWI and was too old to serve in WW2). Many of my generation only had grandmas and I knew I was lucky. And that’s just it, luck. Sometimes no matter how much planning, training and skills are put into practise sometimes it comes down to luck as to who survives and who doesn’t. I think that’s why many veterans feel guilty to have survived, they were no better and no worse than the man stood alongside them.

War and evil still exist in our world and we must be vigilant in protecting our freedom and the freedoms of those who cannot speak for themselves. 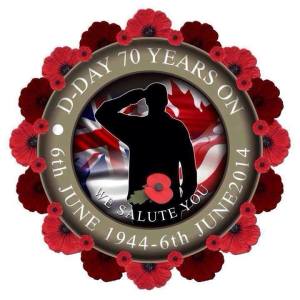 I got married on 15 July 1989 but even though I was caught up in wedding plans and excitement for my married life to begin, I vividly remember this event and the weeks afterwards. Here’s how the BBC reported it.

Here’s how photographer Stuart Franklin caught the days leading up to and including 4 June crackdown:

This is how my friend’s husband experienced it first hand in Beijing:

This is how I experienced the march and vigil in Hong Kong in 2013 during an Amber rain storm. 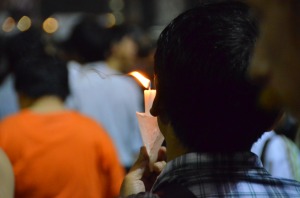 What saddens me still is the memories of Chinese parents who came into the school library where I worked and asked for books about the event that they could give to their children because it is still not really talked about amongst many Chinese families in Hong Kong where we have much more freedom of the press than on the mainland. Yet the hope and belief these parents had was that their children should know about not only this part of their history but also much more and that’s got to be a good thing.

There is a big debate going on in the UK at the moment over comments made by the Education Secretary, Michael Gove, about what books should or shouldn’t be chosen to study for the GCSE English Literature exam sat by children when they reach the age of 16. The Guardian newspaper says “The changes follow the government’s reshaping of the English literature exam syllabus, announced last year, removing the category of “prose from different cultures” and replacing it with “modern works from Britain” – leading to claims that the education secretary was pushing out Steinbeck’s novella Of Mice and Men and other American works.”

It goes on to say: “Gove, who has been inundated with online petitions and complaints on Twitter, has been accused of imposing his tastes and political views on the school curriculum. Critics have included the Observer’s Robert McCrum, who wrote of “new depths of cultural incoherence” displayed by the education secretary: “To exclude American fiction and drama (no Twain, Steinbeck, or Miller, no Faulkner, no Fitzgerald, or TS Eliot) is – to deploy a literary critical term – plain bonkers.” As McCrum points out, the great American writers are steeped in the English literary tradition.” (The Guardian)

This has caused outrage from many authors and educators in the UK including Alan Gibbons, Michael Rosen and the current Children’s Laureate Malorie Blackman.

At the same time, there is debate around a textbook used in some local schools in Hong Kong and which is also for sale in the leading English book shop chain, Dymocks. The textbook asks pupils to fill in the blanks. The South China Morning Post quotes  “A bubble next to a white man with an English textbook reads, “I am [blank]. I am an English teacher”, while the text next to a woman with darker skin reads, “I am [blank]. I am a domestic helper in Hong Kong”. Choices for the blanks include British, Filipino, Indian, Japanese, Chinese and Korean.”

The Equal Opportunities Commission (HK) has registered its concern and the Education Department (HK) has also gone on the record saying that the book is not on its recommended list, thankfully!

It got me thinking about the fine line between governments setting out standards for education and interference in matters which many think should be left to the professionals. Sometimes we need governments to step in and sometimes we don’t. What we can do as concerned adults is make our voice heard when we get the opportunity to vote and if that opportunity is denied us, use other means to make our voice heard.

I just thought it was interesting both issues came up in the two places I call home at the same time.

I read a post by another expat blogger recently about how expats can be on the outside of local festivals and celebrations because of different religious beliefs and whilst I certainly had that experience of looking in and yet not being of that faith so not practising all the traditions, the Tuen Ng Festival (or Dragon Boat Festival as it is more commonly known especially amongst Hong Kong’s expat community) is an outstanding example where expats and local communities come together.

A brief history of the festival can be found here http://www.hkfastfacts.com/Chinese%20Festivals/dragon_boat_festival.htm#.U4x6YxZvV7Y

We got involved the very first year we arrived in Hong Kong via my husband’s work and hubby then raced and became a trainer for six or seven years. His team trained and raced in Stanley and our family were lucky enough to watch from the company’s junk.

Reading posts on Facebook today and looking at the many photos my friends have posted as either competitors or spectators I am taken back to the sounds of the drums beating, the splash of the paddles, the cheers of the crowds and the amazing array of colours that the teams wear.

Here are some of our photos from years gone by. 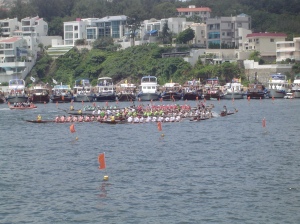 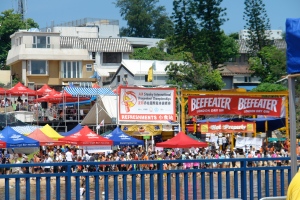 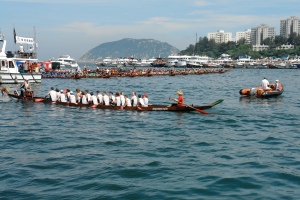 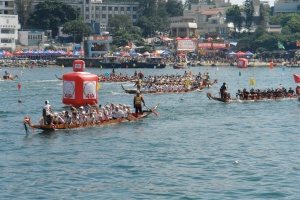 Hong Kong also hosts the International Dragon Boat Festival, the largest one in the world. http://www.discoverhongkong.com/eng/see-do/events-festivals/highlight-events/dragon-boat-carnival.jsp – sadly my photos from 2010 when we stayed in HK for the summer are lost somewhere in “the cloud”!!!

Another blog I follow, Gwolo, old Hong Kong has this post marking the festival in the 1920s http://gwulo.com/node/20042 Fascinating to see racers in long sleeves and hats!